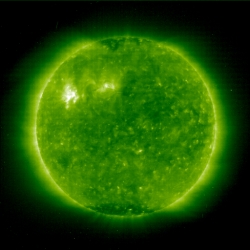 NOT A SUNSPOT: Solar activity comes in many forms. Today, astronomers are monitoring an enormous patch of seething magnetism churning through  the sun's surface in a splash of bright, white froth. It is not asunspot, but it is worth a look:
The active region could be a "proto-sunspot"--a sunspot struggling to form, but not quite able to organize its own magnetic fields into a
coherent, dark core. Or it could be a "sunspot corpse"--the decaying remains of a farside sunspot turning toward Earth at the end of its  short life. Whatever it is, its magnetic polarity identifies it as a member of new Solar Cycle 24--and that makes it a sign of things to come.  ttp://www.spaceweather.com/