Radio amateurs are requested to keep 7.045MHz and 3.720MHz clear for any emergency traffic resulting from the Earthquake which struck Haiti on 12th January 2010 in case any Haitian hams manage to get on the air, and in case of other related events in surrounding areas, including aftershocks.
Arnie Coro, CO2KK, IARU-R2 Area C Emergency Coordinator calls reported at 0245 UTC that they haven't been able to communicate with any radio amateur in Haiti but if there is presence from amateurs from other countries in the area that also felt the tremor. We ask for your support to keep this frequencies clear.
The following is from an e-mail from CO2KK posted to the CQ/WorldRadio Online Newsroom:
"A few minutes after the earthquake was felt in eastern Cuba's cities, the Cuban Federation of Radio Amateurs Emergency Net was activated, with net control stations CO8WM and CO8RP located in the city of Santiago de Cuba, and in permanent contact with the National Seismology Center of Cuba located in that city. Stations in the city of Baracoa, in Guantanamo province, were also activated immediately as the earth movements were felt even stronger there, due to its proximity to Haiti. CO8AZ and CO8AW went on the air immediately , with CM8WAL following. At the early phase of the emergency, the population of the city of Baracoa was evacuated far away from the coast, as there was a primary alert of a possible tsunami event or of a heavy wave trains sequence impacting the coast line at the city's sea wall ... Baracoa could not contact Santiago de Cuba stations on 40 meters due to long skip after 5 PM local time, so several stations in western Cuba and one in the US State of Florida provided relays. CO2KK, as IARU Region II Area C Emergency Coordinator, helped to organize the nets , on 7045 kHz and also on 3720 kHz, while local nets in Santiago de Cuba and Baracoa operated on 2 meters. As late as 9,45 PM local time 0245 UTC we have not been able to contact any amateur or emergency services stations in Haiti. Amateurs from the Dominican Republic, Puerto Rico, Venezuela were monitoring the 40 meter band frequency, that I notified to the IARU Region II executive Ramon Santoyo XE1KK as in use for the emergency, requesting that 7045 kHz be kept as clear as possible ... We are still keeping watch on 7045 kHz hoping that someone in Haiti may have access to a transceiver and at least a car battery to run it. All information that has so far come from the Cuban seismologists tell us of a very intense earthquake, and also of the possibility of other events following. Following the advice of the geophysicists, we are keeping the 7045 and 3720 kiloHertz frequencies active until further notice." Information from Ramon Santoyo V, XE1KK, Jim Linton VE3PC and the CQ / WorldRadio Online Newsroom
73,
Greg, G0DUB
IARU Region 1 Emergency Communications Co-Ordinator
_________________
IK0ZCW Alberto Devitofrancesco - R8 special IR0CF 145.350 -600
www.ik0zcw.it - www.qrz.com/callsign/ik0zcw 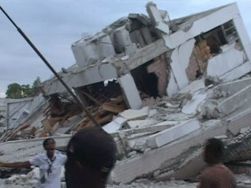